Hope For The Future

It has been difficult for me to find time to write a blog on this trip.  Our hotel has wireless Internet access, but the signal does not reach Becky’s and my room.  The system is slow in the afternoon and the evening, apparently because so many people are using the system.  Last year there were two in the group who had notebook computers.  This year everyone has a smartphone or a tablet with wireless capability.  When I go the lobby in the morning before breakfast, I now get updates on the weather conditions in Ashland, and the latest news about spouses and children.  It used to be that we all were eager to check-in on family as soon as we landed back in the USA.  Now there are on-going conversations.  There are now multiple ways to follow our group.  Not only is there Chris Lindsey’s school blog (http://ChrisLindseyInHonduras.blogspot.com), but there also are Mary Hymans’ and Bill Holzhaeuser’s Facebook pages.

That also is increasingly the situation in the remote mountain villages.  People may not have electrical power and certainly do not have landline telephones, but there appear to be several households in every village with cell phones.  When we ask people how we best can check back with them after we return home, they all reply that there is no reliable mail delivery, but we can post a message on their Facebook page.  Cell phones with data plans are much more common than running water, and there is nowhere that flowing potable water is available.


On Tuesday morning we were greeted at Las Brisas del Pinal (N 14⁰56.749’, W 088⁰14.093’) just north of Santa Barbara by volunteers from the community who already were busy at work putting screen grates in the windows of the new building.  One benefit of working in collaboration with the local community and the local Rotary club is that things that seem impossible to us with our way of doing things are readily accomplished by our local partners.  For example, the steel grates for the windows needed to be welded to re-bar running through the concrete blocks in the walls.  Doing so required electricity.  But the electric meter for the school has not yet been installed.  The community member with welding skills simply climbed up the nearest power pole, spliced in an electrical connection, and unwound a coil of two strand wire with an outlet box on the end.  He grounded the system with a jumper cable clipped to a long piece of re-bar leaning against the building (note to Mike Sherry:  I do not think this guy has bought professional insurance yet.  Here is a potential client who really could use it).

Two trucks from our team were tasked with picking up paint and painting supplies for the new building.  While we waited from the supplies to arrive, our group of fifteen walked a half block down the street to the apartment building where the kindergarten classes were meeting.  Several mothers (one with a baby in her arms) were there helping the teacher with the classes.  Several of the moms of the five-year-olds in class appeared to be teenagers.  They all were excited that real classrooms would soon be available for their children. 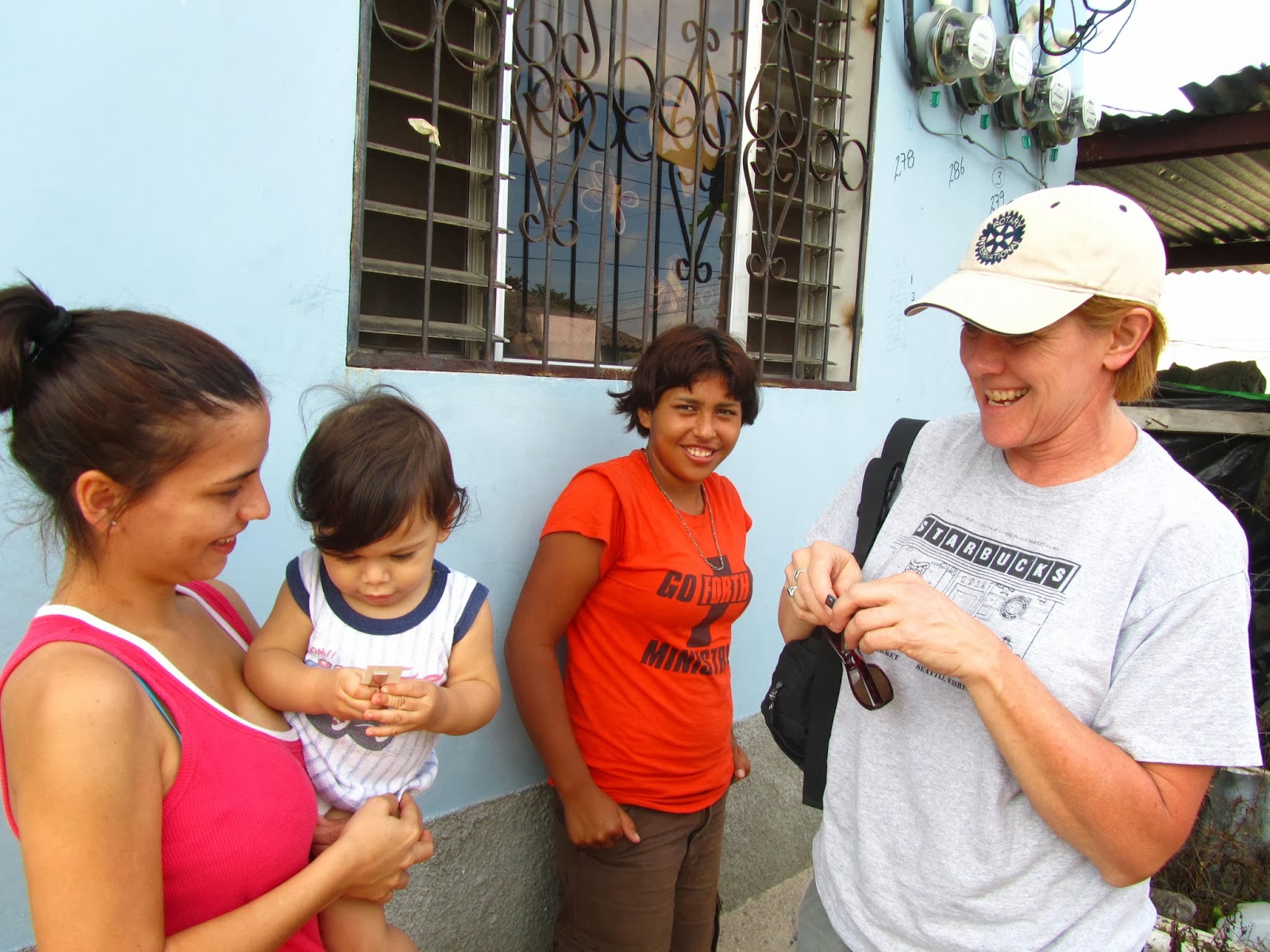 Right before our eyes was a vision of the change our group was trying to facilitate.  Only about sixty percent of the kids in Honduras who start elementary school persist through sixth grade.  The average per capita income is less than $1,900 US per year.  Fifty percent of the population in rural areas live in extreme poverty.  Twenty percent of the girls from ages 15 through 19 years are married or in marriage-like unions.  Twenty-six percent of women from ages 20 through 24 years gave birth before they were 18 years old.

The clearest path out of a cycle of poverty for Hondurans, and for Honduran girls in particular, is education that leads them to seeing a different path for themselves.  The young mothers helping with the kindergarten classes clearly could see this for their children.  They want their kids to like going to school.  They want their kids to like reading and writing and learning science and math skills.  If your five-year old has to leave school simply to use a toilet, what are the chances that he or she will want to come back to class?

The president of the local parents association is a woman in her thirties.  She welcomed our group and then pulled Becky aside.  “We very much appreciate that you are building a kindergarten with functioning toilets,” Becky translated, “but do you know that, while our elementary school has a toilet building, there are no toilets inside and no connection to the sewer line.  Could you possibly help to assure that there are functional toilets in both schools so that our children will stay in school when they have to use a toilet?”

It’s difficult to imagine that any of my kids would have persisted through kindergarten if they had to run home every time they needed to use the toilet.  Having a classrooms, dedicated teachers, functional facilities, and books all are challenges here, but the parents we met are sincerely intent on seeing their kids find a better future.
Posted by AshlandWiRotary at 5:44 AM