Across the Rio Grande

Almost all of our group arrived in Honduras on Sunday as planned.  Twenty-three of the twenty-five in our group were present and accounted for in Houston on Saturday night.  The only problem was that Larry’s and Phyllis’s flight from Denver was cancelled.  They were delayed one day.  We tasked our guide Alejandro to go to San Pedro Sula to get them on Monday while the rest of us scoped the schools and communities that the Santa Barbara Rotarians wanted us to consider in addition to completing the kindergarten in Las Brisas del Pinal. René Vazquez, who was re elected president of the Santa Barbara Rotary Club met with our group at dinner on Sunday night to discuss the potential projects and the communities the club recommended for us.  We also discussed our preliminary schedule for the week ahead. Steve Rith-Najarian, a Bemidji Rotarian and one of our LARA leaders, arranged with Avis to rent five, four-wheel drive, extended cab pick-up trucks from their San Pedro Sula lot upon our arrival on Sunday. and 24 people (our group and René) to visit three remote villages.  Without Alejandro and his Land Cruiser on Monday, there was not room for everyone inside the trucks.  Some people needed to ride in the backs of the trucks.  Kade Platta and Yester Voss hopped in back of one truck, and Dan and Mary Hymans climbed in back of another. The ride did not seem that bad at first, but it did not take long before we were off of the paved road and climbing up and down steep hillsides on deeply-rutted, dusty, dirt roads.  After the first stop, most of those in back were ready to switch.

The only one who stayed in back for the entire day was Kade, the high school senior.  He wanted to experience as much of every scene as he possibly could: men carrying loads of firewood on the backs of horses, little 3-wheeled taxis (a driver in front and room for two in back) zipping by us at hair-pin turns, bright yellow flowers on trees without leaves (characteristic of tropical dry-season conditions), young women carrying babies on their hips as youngsters ran ahead, men wearing high rubber boots (as snake protection) and carrying machetes on their way to work in small fields on the steep slopes, skinny cattle foraging on roadside vegetation, chickens dashing from side-to-side across the road, and toothless, elderly women waving “adios” from the doorways of small, brightly-colored one-room houses.  This is Kade’s first time outside of the USA.  All the reading he has done at home does not compare with the power of each new, first-hand encounter.

We crossed one of several Honduran rivers called “Rio Grande.”  This one was the Rio Grande de Otoro.  There was a long narrow bridge across the wide river and a sign warning that no more than one vehicle should be one the bridge at any time.  We needed the four-wheel drive capability in several places along the way.  Our most distant school is only about thirty kilometers (18 miles) southwest of Santa Barbara, but it was a 90 minute journey. 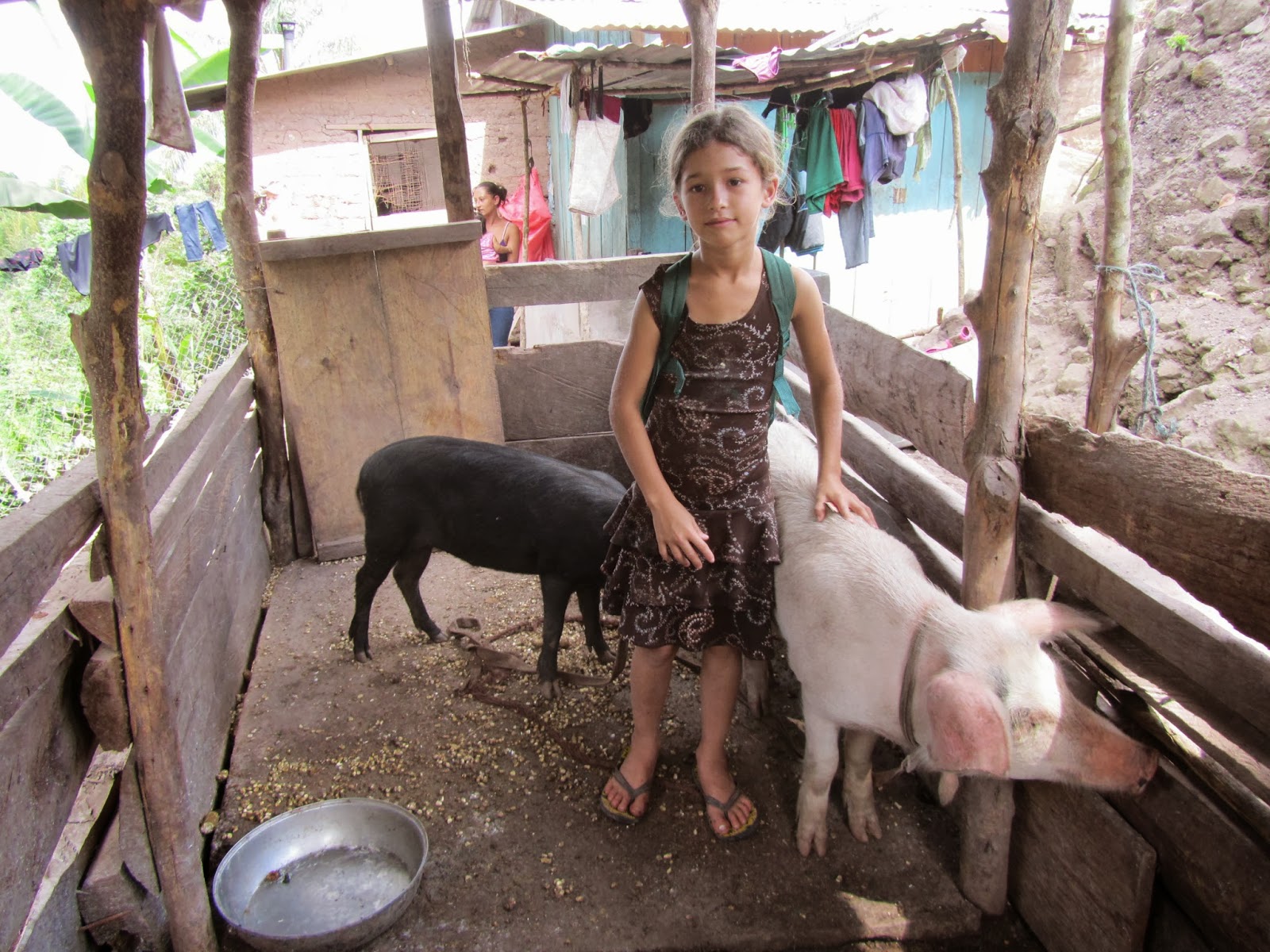 The little village of Teocinte (N 14⁰45.705’, W 088⁰17.242’) sat on a steep hillside.  Part of a group followed a woman up the road to her bright pink house, where she showed the group her pig and chickens.  She lamented the educational challenges that kids face in her village:  forty elementary kids and one teacher.  How can they learn?  Our Santa Barbara Rotarian said that, if we replace the roof, the kids at least will have a functional school house.  Without that much, the kids spend more time dodging the water falling on their desks than they do listening to the teacher.

The largest school we visited has seventy-five students and three teachers in the village of San Jeronimo (N 14⁰59.460’, W 088⁰17.660’), about 15 km northwest of Santa Barbara.  The teachers eagerly embraced Chris Lindsey’s proposal to establish communications between their students and Chris’s students at the charter school in Ashland.  They did not want just one age-group to participate.  All three teachers wanted all of their students involved in the project. 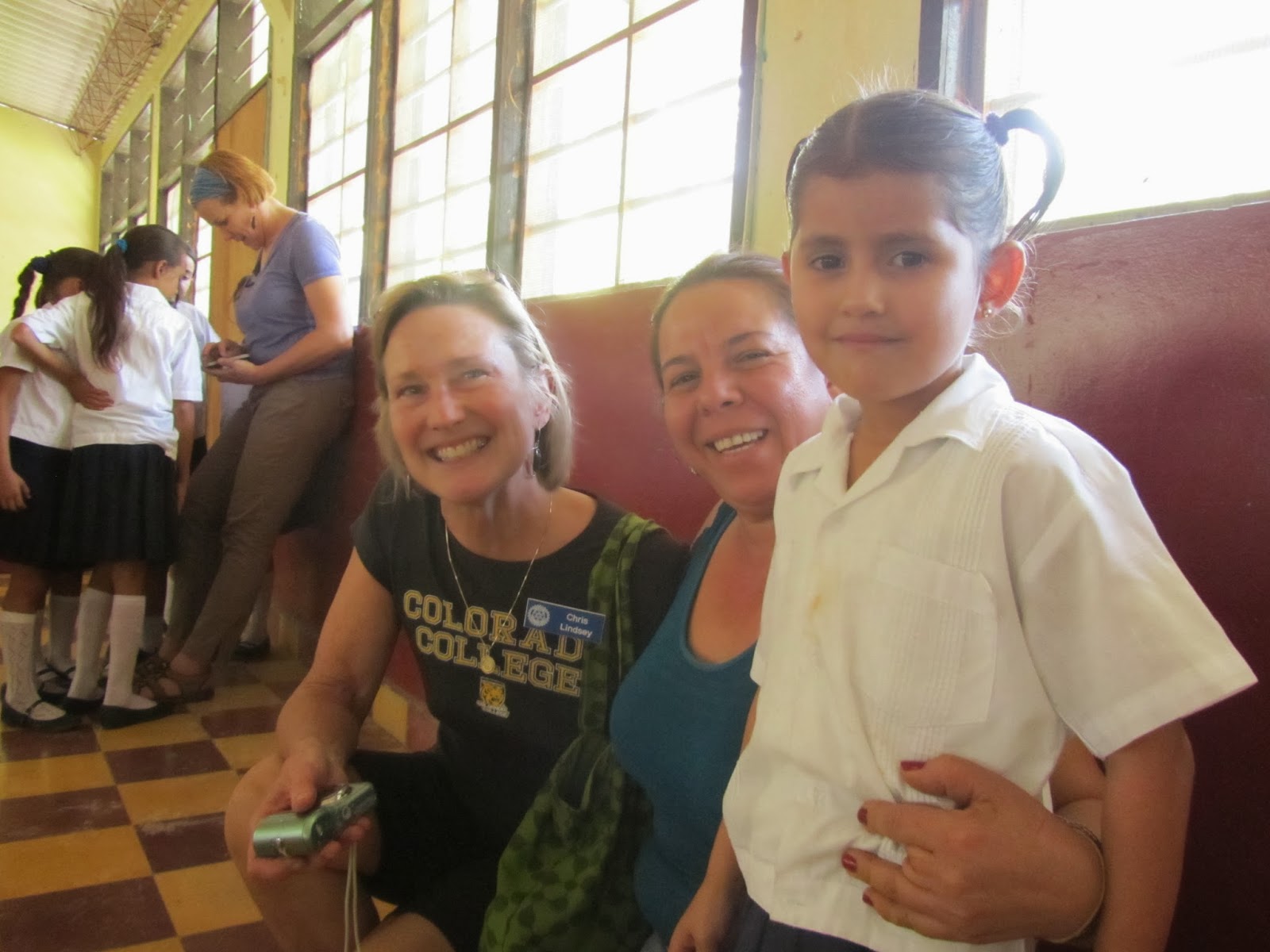 By the time we returned to Santa Barbara and dropped off Chris Keenan to order materials for the first two projects, it was getting late.  Our last potential project is only about 6 km north of Santa Barbara in the village of Los Anices (N 14⁰56.893’, W 088⁰12.591’), near the Santa Barbara Mountain National Forest Reserve.  By the time we arrived, the teachers had taken their bus rides home.  They asked representatives of the local Parents’ Association to meet us and show us the problem with their school house.  Rotarians had replaced the roof at this little two-room school several years ago, but now the wooden trusses are riddled with termite holes.  Unless the trusses are replaced, the roof will soon collapse.

We returned to our base in Santa Barbara without visiting the day care center that the Rotarians want us also to consider.  It is in the city.  If we have sufficient funds and time by the end of the week, we may be able to assist with it.  For now, we needed to debrief about what we had seen and how we wanted to serve.  Each community had high hopes for our help.
Posted by AshlandWiRotary at 4:30 AM