Sunday was our first full day in Honduras.  We arrived from the USA yesterday afternoon and drove from San Pedro Sula, a city of 710,000 people to Santa Barbara (N14⁰55.094' W088⁰14.209'). Santa Barbara with 15,000 people is the capital of the Department of Santa Barbara.  A department is equivalent to a state in the USA.  As we passed a T-shirt factory along the highway, our local driver Alejandro told us that this factory, as well as the factory near the City of Santa Barbara had closed and moved to Nicaragua, where labor is cheaper.  I am eager to find how the loss of factory employment has affected the Colonia Brisas del Pinal where our kindergarten project is located.  Our first step for that project is to see if the funds we collected from the project in the USA were successfully transferred to our bank account in Honduras.  We will not be able to check until the bank is open tomorrow.


Meanwhile, our Santa Barbara Rotary Club partners wanted our group of eleven Americans to see the needs of some more remote mountain villages.  We took a day to visit a kindergarten and an elementary school in the southern-most area of the department.  The one-room elementary school of about 25 students was in the little village of Pueblo Nuevo (N 14⁰ 40.226’ W 088⁰ 17.522’).


Like the village of Cornucopia, Wisconsin, Pueblo Nuevo is adjacent to a national Park.  Unlike Cornucopia, the Parque Nacional Montaña Verde (Green Mountain National Park) is almost inaccessible.  It is in a high coffee-growing region.  We saw a toucan (related to the Fruit Loops bird) flying among the trees under the tall pines on a mountain ridge.  There is no electricity in this remote village.


It is coffee harvesting time here.  We saw pick-up trucks with 10-15 men and women standing in back driving up the narrow, rocky dirt road that winds up the mountainside.  They were being transported to the fincas (coffee plantations) to pick coffee beans.  Coming down the road were pick-up piled high with large bags of coffee beans.  Sitting on top of these bags were four to six men whose job it is to assure that none of the heavy bags fall off as the pick-up bounces around the narrow, hairpin curves and crosses fast flowing streams.  Only the larger rivers have bridges.  In most places, trucks drive through a stream to get across it.

Workers earn 15 lempiras (75₵) for each 3-gallon basket of coffee berries they pick.  An experienced worker picks 15 to 20 baskets per day.  The berries are the size of choke cherries.  At the finca the workers fill a 100-gallon trough with berries.  Using a wooden paddle, a worker pushes the berries to a hole in the bottom of the trough to a machine that separates the fleshy fruit from the beans.  They then rinse the beans in a large tub with water that they carry from a nearby stream.  They stir the mixture with a board that looks like a canoe paddle.  Then they spread the wet beans on plastic tarps in the sun to dry.


The dry beans are the size and color of navy beans.  The workers use their hands to scoop the dry beans into large bags that appear to weigh about 100 pounds each.  These bags are piled in the back of pick-up trucks and carried to a coffee buyer in a city in the valley below.  The buyer pays the owner of the finca according to the grade, i.e., quality, of the coffee in each bag. A typical price is 20 lempiras ($1) per pound, but green (unroasted) coffee beans of high quality sell for quality as much as 80 lempiras per pound.


Coffee is an important export crop in Honduras even though it does not compete very well for quality with other Central American countries.  Coffee yields in Honduras are not as high as those in Guatemala, El Salvador, and Costa Rica because Honduras does not have the rich volcanic soils that are in those countries.  The majority of the good agricultural lands in Honduras were appropriated, often by force, from local Hondurans by US fruit companies (now Dole and Chiquita brands).  Local Hondurans have to rely on marginal lands for their own crops.  Coffee, grown on steep mountainsides, is an export crop on which Hondurans often rely for added family income. 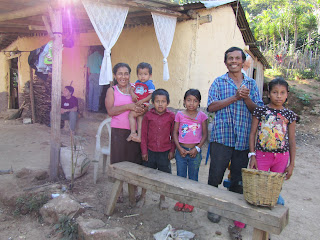 We visited a family who are caretakers of a finca in Pueblo Nuevo: a father, and mother, and ten children.  Their house is made of adobe clay brick walls and a corrugated steel roof.  There were two bedrooms of about 8’ x 10’ each and a 4’ x 15’ kitchen with a clay cook stove heated by burning wooden sticks.  The indoor stove was for cooking.  There was another clay stove/oven outdoors for roasting coffee beans. 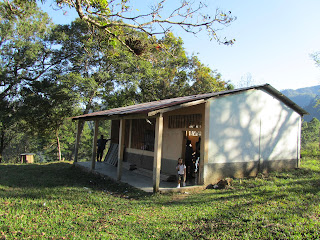 The village elementary school is one room with a roof of rusty corrugated steel attached to wooden trusses.  From inside we could see daylight through many small holes where the steel rusted all the way through.  Approximately 25 students go to this school, but we met only a few who happened to be nearby on a Sunday afternoon.  The community asked us if we would purchase them new metal for a roof and help them to replace the old rusty one.  We decided that we could come back on Wednesday.  The local Rotarian with us said he would arrange to get the materials from a building supply store in a city in the valley below.  The local families said they would remove the old roof.  We will return in a few days with tools to help them put on a new roof.


It was getting dark as we headed back to Santa Barbara.  At one point, we spotted a pick-up truck pulled half way across the road in front of us with a man signaling us to pull over to help.  Rather than stopping, Alejandro swung around their truck and sped ahead.  He said that there recently have been people who are stopping and robbing coffee pickers who drive down the mountain with the money they just earned from the fincas.  Alejandro  said the men in the pick-up looked like they had been drinking and were up to no good.  In all we learned a lot on our first day, and we appreciated having the local Rotarians and Alejandro to guide us to an area where they felt we could be most helpful.
Posted by AshlandWiRotary at 7:41 PM